Getting a good SD Card for your GoPro is an absolute essential unfortunately it can be pretty complicated due to the lack of information and because SD cards aren’t sexy enough for people to care about.

However, getting a bad or incompatible SD Card for your GoPro can lead to serious issues (more on this later) which is why I put together a simple and to the point review of some of the best microSD cards for GoPros.

Not every microSD card works well with a GoPro and no you don’t need latest and greatest (more on this later) that’s ridiculously expensive you just need something that’s good enough to keep up with the high-resolution and FPS of the action camera.

Note: Cheaper microSD cards are a strict NO NO because of they can’t keep up with the framerate and will end up in you losing your footage mid-way due to an error or a camera lock up or even all of the above!

Heads up this are not going to be one of those comprehensive lists of EVERY damm card that works with the GoPro it’s going to be short with only a few but effective options.

Here are my top SD Card recommendations for the GoPro HERO camera:

The reason I’ve chosen these are that they’re the fastest cost effective microSDs on the market and moreover because they are readily available.

SD cards aren’t exactly the most sought out tech as compared to a phone or a GoPro so very few can actually tell the difference from the other. This is why I created a simple buyers guide or a 101 to microSD Cards so you won’t be confused ever again.

What are Speed Classes?

This is a Speed rating that refers to the writing speed specifically used in a real-world recording scenario. The most relevant to the GoPro are the Class 10, U1 and U3. I would recommend either the U1 or U3 as the others are too slow for GoPros.

Note: Unless you’re using the latest Hero7 or the GoPro Fusion you shouldn’t get the V30 as it’s more expensive and definite overkill for most GoPros.  Moreover being a new rating it’s not readily available but expects more models come out soon.

What’s the difference between SDHC vs SDXC

GoPros are compatible with both microSDHC and microSDXC formats, so you can use either one.

The Sandisk extreme is fast, cost-effective, reliable, and easy to find.

Moreover, SanDisk has been in the SD cards game for a while now and is a well-reputed manufacturer so you can rest assured that their extreme cards are safe bets for your GoPro and more.

In fact, GoPro themselves bundle their action cameras with the SanDisk extreme cards and it’s one of the ones they have officially recommended “Works with GoPro” certification program.

It is fast enough to handle the FPS even on 4K modes and as an added bonus is pretty cost-effective.

Samsung is another big name in the SD Card industry that has been constantly pumping out excellent microSD cards. The EVO series is known for being extremely fast and reliable though on a more pricier end they are extremely reliable and a common choice among many serious content creators.

The Samsung EVO is also extremely compatible across all the versions of the GoPro so you can expect no SD Card errors whilst using it.

The Extreme PLUS line is the latest and greatest addition to SanDisk’s micro SD cards.

The Plus is Sandisk hinting on a definite upgrade and it is as the Extreme Plus is definitely a step up from the standard Extreme series.

Why haven’t I recommend this over the regular Sandisk Extreme?

Not everything that’s new has to be better than the older in fact although there is a definite upgrade in the sequential write speed it won’t make a difference as the write speed already exceeds GoPro’s data stream.

If you ask me I would save some money and go for the (older) SanDisk Extreme microSD cards.

This is the top of the bunch in SanDisk’s Extreme serious basically faster and fancier version of its predecessors.

The only real advantage over its predecessors is the fast USB Thumb reader but then again it’s not something that will give you any benefit when you’re filming.

I’m not sure why SanDisk has such a large product line as the Pixtor is basically the same as the Extreme series but with a different branding.

It was designed as a house brand for Best Buy and the one you’re looking for is the Pixtor Advanced with the red and gold color combination there’s one that’s very similar but red and grey but not fast enough for the GoPros.

Lexar is probably the weakest link among the bunch here as it’s had some issues with ownership in the past but it is slightly cheaper which is good for those on a budget.

Although some of their cards are subpar the 1000x U3 is pretty good for GoPro shooting at 4K and can handle the fast FPS. In fact, this is one of the more promising newer version of the Lexar micro SD which has a write speed of 45MB/s that’s good enough for most GoPros.

Samsung seems to be following the trend like SanDisk pumping quite a few microSD cards with different names. The Pro is very similar to the EVO serious in fact their’s no noticeable difference but this being one of the newer microSD cards performs quite well among GoPros hence it made my recommendation.

The 1900x V60 UHS-11 is a really good microSD card for GoPro the only catch is it’s not as readily available as the more popular SanDisk and Samsung counterparts.

In fact, this is one of the few microSD cards that are being used for 4K and 8k video recordings (slight overkill for GoPro) but this depicts the capability of the micro SD card.

If you’re looking for something fast and reliable that can handle the fastest GoPro FPS then get your hands on this one.

What’s so great about my GoPro SD Card recommendations? 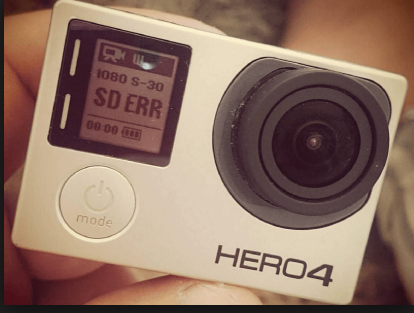 The list may be short but to make it on there the cards need to be able to handle the fastest framerates the latest GoPro Hero 7 and cameras have to offer.

This is so as to completely avoid the common SD Card error many users face due to incompetent SD Cards. Moreover, these cards performed the best during benchmark testing across the intranet.

An SD Card can make or break your content as it is an absolute essential to achieve the best results with your GoPro camera. Hence it’s evident to invest in a well-known microSD card that will work well with your GoPro.

I hope by now you understand how important it is to get a good SD card for your GoPro. It may seem like a complex process at first but honestly, there’s only a handful that you should really look at getting for your GoPro.

There a lot of new MicroSD cards coming out but so far Sandisk and Samsung are reliable enough and won’t break the bank.

Hi! My name is Johanna. I’m from Stockholm, Sweden. I travel the world full time and love learning and reading about Technology, Philanthropy and Artificial Intelligence.